Just a small update today,  spent the last few days amusing myself by making some new flash videos.  They are slut traning and you can find a post with links to the three new ones,  as well as my original,  in my forums.  and giggli dear?  thats 2 updates without one from you :P,  and it is NOT cheating!
Posted by Elizabeth Boissay at 9:13 AM No comments:

Update - beat you too it giggli

Ok everyone,  sorry for the wait,  works been hectic.

Everyone please go smack giggli for not updating in even longer than it's been for me.  love you giggli honey but for that you deserve MUCH spanking!

I posted a new video on you tube last night,  very risque little slut maker,  it's private so you'll have to im me for permissions http://youtu.be/SfZmLmScXnM  if you'd like to watch it im me on yahoo.

I've also been writing some new trance scripts that I havent released yet (they're naughty) and am debating how long to tease before I release them.

In addition I've been working on the store in SL!  We're about half done redecortating and  have added several new trances to the sales floor.  To see the store please IM me in game or look for Hypnotropolis in The Falls.
Posted by Elizabeth Boissay at 11:24 AM No comments:

Hynosis and D/s in SL

It takes some getting used to as you start out in SL.  I've been doing both in SL for a couple of years and for almost 18 years RL.  Some of the big differences are its harder to form the "real" connection with someone that you get in RL (though just as rewarding when you do).  I have several pets I consider myself especially close to,  as well as friends.  I run a large station dedicated to erotic hypnosis,  D/s,  and fetish fun,  a small club,  a store where I sell some of the scripts I've written for auto-trance machines in game,  and my own hypnosis group.  out of all that I consider maybe 1/5th the people I "know" as close friends or pets.  Those who are MINE know who they are so I'm not going to list names.

One thing you have to remember - and it can be hard - is that though it's pixels on a computer screen,  its also a real person behind those pixels on the other end.  A person with real feelings,  real likes and dislikes,  and with their own level of emotional investment (or lack thereof) in the game and in the friendships and relationships there.  So you have to balance fun with safety,  as while you can't PHYSICALLY harm someone with a slip like you could if you flogged them incorrectly in RL,  in some cases you CAN cause them real emotional distress,  especially if they are highly invested in the game emotionally due to real life limitations.

With that said you can also have a LOT of fun there too,  both in terms of D/s,  and hypno play.  SOME Of WHICH you probably couldn't,  or atleast shouldn't,  do RL and others of which your lifestyle may not allow in RL without riskig career or societal repercussions if discovered.  For example indulging in taboo's that are more extreme such as beastiailty,  necrophillia,  body transformations into furrys,  walking around "towns" nude and leashed (as long as the town is in a adult sim).  You can indulge in virtually anything you can imagine,  so it is a fertile playground for the mind.  even in non BDSM or hypno play there are so many options,  being Jedi or sith,  vampire,  werewolf,  demon,  furry,  robot, android, gynoid,  etc.  So the gae truly does offer something for almost anyone.

As a venue for D/s and hypno play there are unique opportunities,  restrictions,  and challenges.  I'll go into those in more detail in another post. but the opportunites can be very entertaining.
Posted by Elizabeth Boissay at 7:00 AM No comments:

I am Jessica,  better known as Mistress Elizabeth Boissay in SL.  I practice erotic hypnosis and D/s  both in RL and SL.  Upcoming will be posts that discuss the fun,  kinks,  naughtiness,  and sometimes sadness that goes with life.  In the main the blog will be focussed on FUN things in SL,  though as the author I reserve the right to occasionally delve into not so fun subjects,  like responsibility and realizing that sometimes your best won't be good enough.  I hope everyone who reads the blog will be a little happier,  a little wiser,  or a little hornier for me sharing my thoughts. 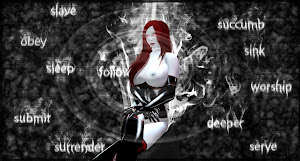